Feel what you think with intensity 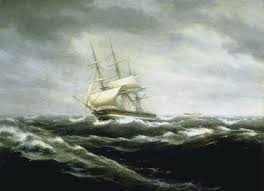 The whole family, my mother, two sisters and me were fetched and be brought by my father to the very far island where he was working.  We had to travel by sea via motorboat.

It was a sunny morning, we left our native town.  I was excited in our sea journey.  I saw school of fish, some flying and jumping as they played, also whales were blowing waters in the air  like fountains in the clear, bluish, serene ambiance of the sea, the green islets and other islands far from us.  The sky above  guided us with it’s  clear and fair weather.  How wonderful wondering in the vast and pristine beauty of nature, the sea.

In the middle of our trip, the sky started to become cloudy synchronized by the cold breeze of the sea.  Thereafter, the thunderstorms, followed by the downpours of the rain, a sign of a coming bad weather or storm.  Minutes after, heavy rains, high and turbulent waves raging upon us.  The captain of the motorboat decided to dropped by the nearest island.  The crew maneuvered so that we could reached the island instantly.  We were wet, trembling and hungry, we had not eaten our supper yet.  At last, we landed to the target island, the captain looked, helped and appealed to the first house owner he found to let us in and had a rest.  The house owner accepted us hospitably and offered us hot drinks, lent us dried clothes and stayed the night with them.

The following day, there were various fallen trees and plants along the seaside.  We stayed in the island until the storm subsided and continued the journey again.  The waves were moderately high that the motorboat could tackle and manage.  My younger sister, five-year old,  sat beside the boat holding the support bamboo parts of the boat, her hands in the water playing.  A crew scolded her and reminded her not to do it.  Somewhere in the deep, blue sea, she saw big sharks according to her, but they were not sharks, they were dolphins jumping and swimming seemed guarding our sailing.  They only stopped following us when we were near to the island where we had to land.  It  was a delicate journey, nevertheless a  great adventure of a lifetime.  We reached the destined place, our new and second home safely.