Give yourself the care and love you deserve so you can extend the same to others. 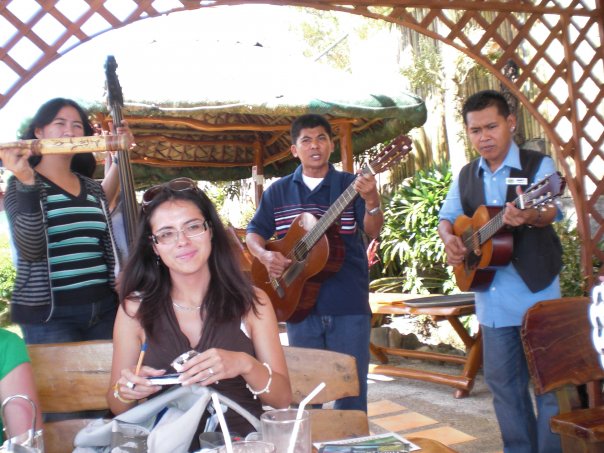 The school where I was studying, was two hours ride in a jeep from our hometown.  One weekend, instead of going straight home from school, I dropped by  and visited my auntie who was married and living in the barrio.  The barrio was located along the highway or national road.

The niece of my aunt, a friend of  mine, we are of the same age, suggested me to stay overnight in their place.  After the dinner, I went to their house, walking distance from the house of my aunt.  Their home is big and highly elevated with balcony or terrace.  It is surrounded by huge, high trees such as mangoes, coconut. and other fruit trees, as well as herbs and flowering plants.  As I sat in the terrace playing scrabble with her, I felt the fresh and cold air touching my whole body.

While playing the scrabble, I hear afar sounds of a guitar, going louder and louder as it neared the house.  As they approached our place, a young man in the group started singing accompanied by their guitars, all of them sang together. They sang variety of sweet and romantic love songs.  I just listened to their music while we went on our game.   Their voices were so soft, gentle, loving and coming sincerely from their hearts.  After them, another group of men arrived and did the same, serenading us.  That same night, four groups of young and married men alike offered us their sweet and romantic melody through serenade.  It was an enjoyable moment in time and seemed I felt in love that night.

One time, I revisited my aunt in their barrio.  I spent the night there.  It was a tedious day that I slept very early.  I was in deep slumber, nothing could disturb me, not even the long serenade done by an admirer, a relative of my uncle.  My uncle told me that I was serenaded by his nephew last night.

After I graduated in college, I went back to the very far island where once I studied for one semester.  My father told me that I should return to our native town because I  had a new job at my uncle’s company in a so distant city.  Together with my father, we rode a jeep to the harbor where we had to board the ship going to the city.  Unfortunately, the arrival of the ship was delayed, we were stranded at the pier.  Thanks God, a cousin of my father lives near the pier, so riding a tricycle we went and  we stayed there the whole night.  As we rest, I sensed something different.  All of a sudden, there was the strumming of the guitars, seconded by the singing voices.  It was a “harana”  I just listened until they were gone.  Before midnight, I was surprised by the arrival of a big service vehicle, from the window, I saw men in uniform got out.  They were entertained by the house owner.  They asked permission if they could serenade the lady visitor.  They were permitted and I was told to face them.  Because of their hospitality to us, I followed their request, I went down to the ground balcony and welcomed them.  While the leader introduced himself to me, his escorts started singing.  Time of goodbyes came and we slept afterwards.  Another unforgettable experienced, memories to be cherished.  The following day, we had embarked the ship and about twenty hours of sailing, we arrived at the city harbor.

A new chapter of my life began, in the city, working as an employee in my uncle’s company.